Those of us old enough (or perhaps I should more accurately say interested enough) will recall that before the days of the Premier League, football teams were ranked in Divisions.

My father and I would rank composers and artists in the same way. There was no fixed number in any Division, but it was always accepted that Cézanne would feature high in Division One and I’m not sure how far down you’d have to go to find Gilbert and George.

I popped ‘Grieg’ into the search bar of this blog the other day, and answer came there none. Although recognized as one of the great Romantic composers, Edvard Grieg (1843-1907) cannot sit alongside the likes of Bach, Beethoven, Mozart, Schubert; and accordingly he finds himself firmly in our Division Two. 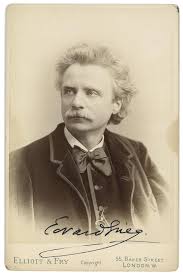 Hang on, I hear you protest, what about his Piano Concerto, one of the most popular of all? And yes, this, along with the Peer Gynt suites, are enough on their own to guarantee him musical immortality. His music is to Norway as that of Sibelius was to Finland: he created an instantly recognizable Norwegian identity, drawn largely from folk-song, and few would begrudge his influence, especially on the likes of the Frenchman Ravel.

So here is a piece from the Peer Gynt Suite, sung, rather than fully orchestrated. Solveig’s Song, is a reminder that however awful we may be (and in Henrik Ibsen’s five act play Peer Gynt was about as amoral as it’s possible to be) there is always the chance that somewhere someone is holding a candle for us: Solveig was abandoned twice by Gynt, but what a forgiving maiden she is! Here is the translation:

The winter may go, and the spring disappear,
Next summer, too, may fade, and the whole long year,
But you will be returning, in truth, I know,
And I will wait for you as I promised long ago.

May God guide and keep you, wherever you may go,
Upon you His blessing and mercy bestow.
And here I will await you till you are here;
And if you are in Heaven, I’ll meet you there.

This is a recording by the Russian soprano Anna Netrebko. It’s a beautiful melody, the sort of music which his big fan Tchaikovsky must have had in mind when saying “What charm, what inimitable and rich musical imagery!…What interest, novelty and independence!”  (Not sure Tchaikovsky would have made the most riveting critic, but he had other things going for him.) Try joining in at the second verse – it’s not easy.

Norway was a sparsely populated country, a mere two million when Grieg was born. A measure of his popularity and esteem in his homeland was that between 30-40,000 of them lined the streets at his funeral after he died of heart failure.