I remember well the first time I went to my first opera. It was Verdi’s La traviata. Nothing particularly special about that.

Except for the fact that I was just 12 years old – and it was at Verona. And believe me there is plenty special about that. This is what my first, and outdoor, opera experience looks like: 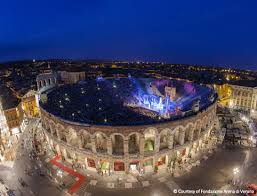 It was quite wasted on me, of course. We were on holiday with my grandfather on my mother’s side, and the children (that’s me, my sibs and a couple of cousins) had to be hauled along in the absence of anything better to do with them.

Thanks to the wonders of the internet, today I discovered something else which was wasted on me. The main roles of Violetta and Alfredo were sung by Renata Scotto and Carlo Bergonzi. I can’t be certain they were on duty that night, but there has to be a good chance they were.

To put it in perspective, it’s a bit like being taken to a concert at the age of 6 and learning a few years later that the lead act had been David Bowie. Or Miles Davis.

In David Hare’s new play about the creation of Glyndebourne opera house, Moderate Soprano (on until June 30th and well worth a visit if you can), its visionary, John Christie, protests his dream against his doubters with the words “There are always a thousand reasons not to go to the opera!”

A hundred years ago, maybe. Not so today. Cost? Nah. You could attend any sporting fixture for the same or less; and if sport doesn’t interest you, your visit to the hairdresser, especially if you are in the high/lowlights game, could set you back far more – and you’d do that several times a year.

The worst two, that it’s “just for toffs” or “it’s not my thing” are tosh. In most cases, they are uttered by people who have never bothered to try. For the life of me, I cannot understand why, as long as you have been introduced to the right one at an age you will remember it, the immediate urge will not be to go again. Carmen, La Bohème, The Magic Flute, Aida, Rigoletto, Tosca, The Marriage of Figaro – any of these fall into that category. We took my son to Carmen, and his Christmas present to me that year was just the two of us going to the English National Opera. I rest my case.

And, little though I knew it at 12 years old, Verdi’s La traviata. Probably the most performed of all his operas, it is impossible not to warm to it. It  is the opera Edward Lewis takes Vivian Ward to see in the film, Pretty Woman (with a not dissimilar plot, except that only one has a happy ending – well, it’s an opera, what did you expect?). The tunes go on and on.

Here is one of my favourite singers, Dmitri Hvorostovsky, who died far too young at the end of last year, fessing up to his son why he has just asked Violetta to give him up for the sake of their family’s reputation. Lovely, lovely singing, and listen to that last note, 14 seconds of it. Opera Holland Park is staging it now to ecstatic reviews: I know nothing of current ticket sales, but I do know that a few remain on the 19th June, when the proceeds all go to MS research. Go to the website to check, you will not be disappointed. http://www.operahollandpark.com

Indulge me, I cannot resist a quick bonus. I have noticed that the music for the forthcoming FIFA World Cup is something I added in an earlier post in memory of Dmitri. Here it is again. What a voice. What a sad loss.