Sport has once more interfered with my musical musings, the usual quota increased this year by the World Cup. I was not glued to every match, but it was a gripping contest in Moscow, even without England’s success – for that it surely was.

The Open at Carnoustie had all the ingredients for a thrilling last day, with over half a dozen players in the mix. The last hour promised to be the most exciting for years, until, one by one, every contender bar one decided it wasn’t for him. As a consequence, there was no multi competitor play-off, just an outright (and thoroughly likeable) champion.

Something of an anti climax. Just like the well-billed Blood Moon last Friday, whose visibility in the south of the UK was about as evident as a policeman when you really want one. (Which, aptly enough, is only likely to be, if ever, once in a blue moon.)

But it did have the effect of calling to mind one really magical five minutes of music which I encountered for the first time just weeks before. I had never been to a performance of Capriccio by Richard Strauss until this summer.

I have written about Strauss’s unparalleled writing for the soprano voice (Search on Home Page reveals all), but he was also a top-rate orchestrator (see parentheses above). Capriccio was Strauss’s last opera, first performed in Munich in October 1942. The year. Just imagine attending that evening, fully aware of what horrific misfortune could occur at any moment.

The opera does not need a lengthy explanation here: it is, quite simply, a lighthearted piece which debates (through two different suitors for a Countess) the perennial question of which art form is the more important – poetry/words or music?

They are, of course, inseparable.  The combination of the two throughout the opera is unsurprisingly sublime: at one point I counted eight different voices singing their own lines all at the same time, each unique to him- or herself, and each distinguishable within the group.

And then this.  As the Countess prepares to reflect on her dilemma, Strauss slips in these few minutes of Mondschein (Moonshine) music.  I have written about music connected with the moon in the past (in danger of repeating my above parentheses now). As the son of a horn player, he knew a thing or two about this instrument, which opens this brief passage.

There are a few recordings to choose from. Antonio Pappano can scarce do no wrong in my ears, but I think he takes it a tiny bit fast; and Barenboim’s live concert succumbs to the very smallest of blemishes on the horn.

I’ve picked one where the sound is perfect and the visuals are just irritating. So when you’ve clicked on it, I would encourage you to sit back and wallow in the sound, wishing, as I did when I first heard it a month ago, that it could go on and on and on. A single horn, then full orchestra with a couple of harps for good measure.

Another new discovery. And a moon you can rely on, too.

If you are ever lucky enough to be a guest at the Salzburg Festival, you would not let slip that you weren’t a fan of Mozart; or Wagner at Bayreuth.

So while at the Aldeburgh Music Festival, which I have attended for the last few years, I have kept my mouth firmly zipped on site that I am not a great lover of the music of Benjamin Britten (1913-76). It would be an act of heresy, risking immediate expulsion and a ban to return for life. Some readers will be aghast at such an admission, about one of this country’s most gifted composers, and the man who set up the festival seventy years ago with the musician and his life-long partner, Peter Pears, seen below on the right with Britten. 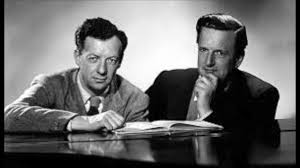 From a modest start in Aldeburgh, its popularity grew to require larger premises and hence its move to Snape Maltings. The accoustic in the 832 seat concert hall is extraordinary. 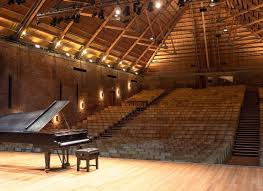 We listened to a violin concerto in the first half of one concert without knowing whose it was, having left the programme in the bar. There were, in my view, isolated moments of real beauty, but not frequent enough for me to really want to listen to it again – which, I admit, is exactly what I would encourage you to do if you didn’t like one of my posts.

During the interval I tentatively asked what we’d just heard, to be informed that it was the Britten Violin Concerto.

Right, I thought, I’m really glad I hadn’t known that in advance, because I’d have made up my mind that I wasn’t going to listen to it properly. But I did; and when I learnt of its identity, my reaction was that I’m glad to have been made to hear it without knowing the composer, ticked that box, and no need to seek it out again. A view I still hold.

I’ve probably lost a few of you in disgust already. How lazy. How short-sighted. But is it really any different to ditching a book half way through if it hasn’t got hold of you by then?

And yet maybe that’s one approach when listening to a piece for the first time: give it your full attention without knowing the composer, and find yourself less biased and more curious. Then see if you want to hear it again, or, better still, seek out other works by the same hand.

(The second half of the concert, incidentally, was Dvorak’s New World Symphony, whose popularity since its very first performance has caused it to be so overplayed that I would never actively seek it out. He wrote eight others, only a handful of which get a decent airing. It was so brilliantly played, however, that, much to my annoyance, I have been humming excerpts from it ever since. A different result for my prejudiced thinking. Serves me right, I know. And if you haven’t heard the piece, which includes the backing for a famous bread brand advertisement, I would encourage you to ignore my temporary boredom with it and listen to it.)

The difficulty I have with Britten is that he couldn’t stand the music of Verdi (seriously?), Brahms, Elgar and Vaughan Williams. But his output was prolific, and his 16 operas redefined English opera. I know there are plenty of exceptions, it’s just that I find much of his music to be so – how can I put it? – bloody miserable!

I am an impatient listener, but when I hear a work I do not like, I am convinced it is my fault. Not my words, but Britten’s, and that must be my admission henceforth. I’m conscious that this post is almost in breach of my mission to share pieces with you that I enjoy, and I’ve hardly bigged up Britten here – but here is one of those exceptions.

On the final day of the festival, we attended a recital given by the bass-baritone, Bryn Terfel. What a way to finish that was. Amongst his songs was this setting by Britten of the folksong Foggy, Foggy Dew. As an example of a major work, it is not; but it is a rare moment of fun, especially in the hands of Terfel and his gifted accompanist, Malcom Martineau.  The story is brilliantly told by both of them. Click below image.

We were treated to two encores. And here comes a gripe. The first was a humorous one about a dragon. After he’d finished it, with applause still strong, there were people all over this very open hall bolting for the exits to make a head start from the car parks. Can you imagine how awful that looks from the stage? And can you imagine missing this, one of Schubert’s most beautiful songs, Allerseelen, written for the Feast of All Souls? Serves them right, I say.

The last line was sung even more quietly than it is here, almost a whisper, and we heard every word. What a gem. Click again-