It helps to have some kind of a trigger or cue when writing these posts, but sometimes the desire to get a tune out to you is so overwhelming that I run the risk of not sharing it at all if I wait for that elusive prompt.

Today’s music is a case in point. It requires no link to anything; it is just one of those arias that once heard is loved for ever.

Mozart’s big four operas, The Marriage of Figaro, Cosi fan tutte, The Magic Flute, and Don Giovanni are stuffed with melodies which are less plentiful in his others. There are individual arias aplenty in The Seraglio, but I doubt many people go around humming them with any huge enthusiasm. Or at all, for that matter.

Today I have picked an aria which was not even included in Don Giovanni‘s first performance in Prague in 1787. Elvira, one of the Don’s many, and discarded, conquests, was played by Caterina Cavalieri, who complained that her role did not have any standout arias for her to show off her skills. It’s quite possible to speculate that she felt her assets were being underutilized. 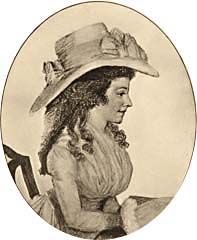 So she asked Mozart to address the matter. Be careful what you wish for, as they say.

She got herself a blockbuster of a melody all right. But it came at a price: it requires truly phenomenal breath control, and it separates the men from the boys – or whatever the female equivalent of that analogy  might be.

Don Giovanni is not just one of Mozart’s greatest operas, it is one of the greatest operas by anyone, anywhere, ever: a masterpiece which encompasses tunes galore, comedy, drama, all underlined with a clear moral message. Ingredients which combine to make it a favourite of many.

There is no need to embark on a lengthy synopsis. In short it is the story of a murderous lothario who is warned his time will come, as it does in spectacular fashion.  When the ghost of  one of his victims, the father of one his conquests, accepts the Don’s invitation to dinner, he is given several chances to repent; and in in refusing to do so is engulfed in the flames of hell.

Barbara Frittoli (b 1967) is the soprano who stands out amongst so many others in this aria Mi tradi...To sing it too slowly is to lose out on the dancing woodwind in the background, especially the clarinet, a ‘conversation’ device between singer and instrument which Mozart so ingeniously uses elsewhere. And to sing it too slowly is to cheat, because it avoids the breathing difficulties which come with speed.

There are a couple of minutes reflection before launching into the aria proper. Listen, in particular, to the passage 5.11-5.24 – thirteen seconds of acrobatics in one breath, it’s astonishing.

What’s she singing about? Oh, just the usual lament – you’re gonna get your comeuppance, you’re a cad and bounder, but I still fancy you, dammit.

Click on the image for coloratura singing at its very best.