‘Happy tune? Is there such a thing? If so, I never heard it.’

So, apparently, declared my favourite composer, Franz Schubert. I can’t imagine who or what provoked him to say such a thing: he may have had a short and melancholy life, but there is much in his own, huge output which contradicts his statement. And whatever your taste in music, ancient or modern, all of us can point to something that makes us happy.

I wonder, for example, if Josef Haydn, who lived for more than twice as long as Schubert, was even capable of writing a sad piece.

No. If Schubert really said this, he was just having a bad day. Or perhaps he never got to hear today’s piece by Mozart, who, in a letter of 1786, wrote that ‘melody is the very essence of music’ – a view in keeping with Haydn who said, even more simply, that ‘melody is the main thing.’

A melody, of course, can just as easily be sad. But imagine wandering  the streets of Vienna in 1786, or tucking into a little something in the coffee shop capital of the world (Mozart’s early demise deprived him of the Sachertorte, which didn’t arrive for another thirty or so years, bum deal) – and being struck with a tune like this.

I have written about his piano concertos before and many of the famous ones will already be familiar to even the most reluctant ear.

The 3rd movement of his 23rd Piano Concerto in the sunny key of A major has an infectious beginning , and whenever  I listen to it I have a real sense of Mozart wanting to reprise these opening seconds at the earliest opportunity. There is plenty of playful woodwind, but every note, it seems to me, is a means of returning us to that opening burst.  Which, obligingly, he does.

This, dear Schubert, is unalloyed happiness. I can’t believe you could have heard it, for you would surely have been cheered had you done so. Maybe you have since, because apparently the angels play Mozart when they get together.

It’s a grey day as I write. Division in our country is at its worst for decades. Yes, I know that there are very many composers whom I’ve not yet written about, but at times like this – well, thank goodness for Wolfy.

’Day by day, remind yourself that you are going to die.’ (St. Benedict.)

Now, there’s a cheery thought to open today’s post. I cannot recall the first time I became aware not so much of death, as specifically my own mortality. With the years elapsing ever faster, it seems, it is hard to avoid the blunt reality that what lies ahead is considerably less than what has passed. St.Benedict’s encouragement preys on me more regularly now.

Today the Christian calendar commemorates the feast of All Souls. As I write, it is a glorious autumn day and whether you subscribe to a faith or not, it is impossible on a day such as this not to marvel at creation all around us – and the ephemeral nature of it at the same time. Today will be yesterday before we know it.

And the Christian faith reminds us that ‘we know neither the day nor the hour’. Obvious enough, of course, but a caution which carries more weight as the years are ticked off.

On this feast day, I ponder how lucky I am to have reached three score years, but dare not, as a young child I might have done, assume I will be granted the ‘plus ten’ on top. Carpe diem makes more sense nowadays.

The more so, when we bring to mind the many we know who have predeceased us; and, as we approach the 100th anniversary of the end of the First World War, the millions unknown to us who never experienced adulthood. Teenagers, so many of them.

Teenagers. Some of them shot at dawn by their fellow men for cowardice in the face of the enemy, when in reality they were traumatised.

Today I turn to Giuseppe Verdi (1813-1901). Not for the first time, I know, (I’ve written about Rigoletto before) but the man had a way with tunes, and could capture heartache, passion, and emotion like few others. He was a musical giant in a turbulent Italy and in operatic terms, nothing has really come close to him in that country since. Or before, come to think of it. 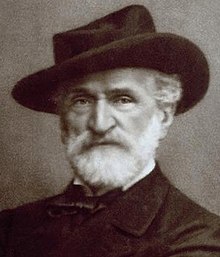 So it is little wonder that his Requiem Mass, first performed in 1874 to commemorate the first anniversary of the death of the poet Alessandro Manzoni, has been viewed by many as being operatic in nature. It requires a large-scale approach, big choirs and a sizeable orchestra, to deliver sometimes deafening sounds. It is long, certainly; at about ninety minutes, it has rarely  been used liturgically, unsurprisingly, and some have tried to stage it, not very successfully in my view.

Amidst all the fire and brimstone, however, are passages of pure loveliness which tug the heartstrings to their very limit. The Agnus Dei, which is recited in a typical Christian liturgy, is one such: scored for soprano, mezzo soprano, choir and orchestra, it provides those few minutes for us to reflect on those no longer here, beseeching the lamb of God to grant them eternal rest.  Listen out for the strings whose searing ten second accompaniment towards the end goes directly to our sadness.

I have deliberately chosen a recording which benefits from two things: first, under Riccardo Muti’s direction (not, admittedly, amongst my favourite conductors), because it is taken at a slower, and hence, reflective pace; and secondly because there are no distracting visuals.

Click on the image below. With no such distractions, you can just close your eyes for five minutes and cherish the memories of loved ones (and others) who are no longer with us, or facing that moment now.