Why do you turn to music? Any music? What is it for?

It’s one of those great unresolved questions. Trying to demystify it is in itself an exercise  which will rob it of its mystery: the effect of the same piece on each of us, whatever the genre, can be quite different, depending on the circumstances.

But in one thing I think we can be united. It is corny and unoriginal to affirm that music is a universal language, a healer. Few would dispute that. It is more than that: its common and unparalleled attribute is that of all the arts it takes us out of the world we inhabit and into our souls. We need it for solace in times of sorrow, just as we do to enhance a celebration.

I suspect, however, that many of us don’t really give that a second thought. Turning to it is a simple act of instinct.

Think for a moment of those for whom such access is not available. Has there ever been a more graphic depiction of nothingness than the appalling images from Mozambique this week? We have grown accustomed to similar pictures over the years, natural disasters appear to be on the rise; but the rampant annihilation of everything for as far as the eye can see brought with it a stark reality: a total absence of life. An expanse of nothingness. I mean, just look at this. Just look at it. 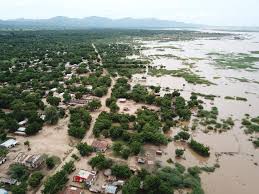 In such a context, music may not appear to serve any meaningful purpose. To those who survived, it will be irrelevant, and it is anyway unlikely that any of them would have been able to enjoy it before the storm hit. So what is the relevance or point of music here?

To those of us lucky enough to access it, the answer, I think, is the power to inspire. To cajole us to act. Uplifting music can do this, can arouse those of us more fortunate to make some small difference.

Take this gobsmackingly good tune from the last movement of Sibelius’ 2nd symphony. Sibelius, about whom you can read more in an earlier post in November 2016 (and I would immodestly suggest you do) is as synonymous with Finnish music, as Elgar is with British. He led a long life, into his 90s, despite (or maybe because of?) having a healthy diet of vodka and cigars. It is all the more surprising for the fact that the inclement climate and condition of his homeland at the time of his birth meant that the average length of lifespan was just a third of that.

The tune is huge, expansive, and everything is then about returning us to it. The combination of cellos, woodwind and brass in a quickening pace alert you to this, but it’s as if Sibelius doesn’t want to arrive there too soon. There is melancholy aplenty here, and time for inward reflection, be patient with it; but ultimately a triumphant shift into a major key leaves us almost shattered with exuberance. Ignore all the white tie and tails stuff, (Leonard Bernstein with one of the world’s great orchestras, The Vienna Philharmonic), this is a magnificent sound and you will find it quite hard to get the tune out of your head.

Don’t be put off by the fact that it’s just over 15 minutes: if you don’t have time for it now, make time for it later – it is life-enhancing music. I have an aunt who has a particular fondness for this piece: if you’re reading it, Di, this one’s for you.

Turn up the volume and let the sound take you away from the woes of the world. But maybe pause to think and be grateful for how lucky you are to be able to do so.

4 thoughts on “The glory of Sibelius”