When was the first time you realized you liked cheese? You’ve always liked it? Spinach, then; liver; avocados; offal; brussel sprouts? (Fair enough, you still don’t like those.) Chances are, however, that a liking for one or all of these has come over time.

Mozart, Haydn -purists, forgive me- are the chips of classical music. Nobody ever popped a chip into their mouth, chewed it over, weighed it all up, and after a lengthy period of deliberation concluded ‘Hmm, quite like that, I suppose.’ It’s the same with Mozart and Haydn: you can’t help but love ’em.

Other foods, composers, creep into our senses with age and a maturity to experiment. It is the abandonment of an almost congenital prejudice: Mozart, chips, sure. Stravinsky, kidneys, nah, just don’t like the sound of it. So without any rationale, which you simultaneously acknowledge, you then decide you’re not going to even try it. 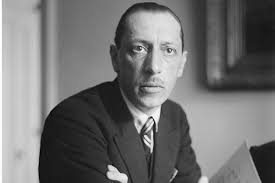 You know what’s coming now, don’t you. In my efforts to persuade new listeners that there will always be something to like in classical music, I have tended to err on the safe: melody has been at the heart of every post thus far.

Today I’m going to challenge your ears with something altogether less comfortable. Brace yourself for an assault of dissonance and fury. Don’t you dare quit yet. My guess is that if you are new to classical music, and especially if you are young, this can only excite you.

Today it’s not about a tune. It’s about rhythm alone, and how multiple changes of musical time signatures can combine to leave you almost scared, bewildered, shocked.

(Rhythm can exist on its own, by the way. A melody, however, cannot; it depends on rhythm to give the tune its meaning: try singing Elgar’s Nimrod, giving equal time to each note and you will quickly land up with the blandest collection of notes.)

I have written about Igor Stravinsky (1882–1971) before, but in the context of his delightful Romance from The Gadfly. Now I want you to imagine yourself in the Théatre des Champs-Elysées on an evening in May 2013.

Without knowing it, your delicate ears are about to be bludgeoned with the most influential and controversial piece of the 20th century. The Rite of Spring, a ballet staged by Sergei Diaghilev and choreographed by the greatest ballet dancer of the early 20th century, Vaslav Nijinsky (1890-1950), lasted just 35 minutes. But it caused a stir from the moment the curtain went up.

Some have put this uproar down to the choreography, but the music was so alien that its impact can scarcely be surprising. I will not trouble you with the plot here, beyond summarising that it is a ballet which culminates in a chosen maiden dancing herself to death. Nowadays, the music is one of the most performed of all 20th century pieces in the concert hall.

Here is the final part, The Dance of Death. It is outrageous, scandalous, daring, ground-breaking, menacing, deranged, offensive: at its many rehearsals, some of the musicians were having to stifle their laughter in disbelief. But for all that, in its multiple changes of rhythm, drum thumps (requiring two players) it is unquestionably intoxicating, too.

A final thought. Have you ever heard a chef openly admit that he detested a particular food? All of them seem to rave about all food, whatever it is. Pierre Monteux, the conductor on the first night, had no such qualms: he admitted freely that he loathed the piece – but went on to conduct it another 50 times. What an honest professional.

Click on the image below. I have attached the music; not because I expect you to follow it, but by way of demonstrating that I don’t think you need to be a musician to see the chaos on the page. Try and see it through, it’s only a few minutes.

Who knows? In time it may rank alongside a newly acquired taste in food; but if it remains your brussel sprout, at least you will have tried it.