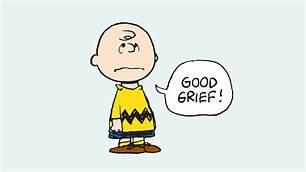 Charlie Brown, of Peanuts fame, often had the mot juste. Two, in this case, simple words are all that’s needed to encapsulate how most of us feel in the UK right now.

The ennui can be enough to stop you writing a blog; and yet I realise it’s exactly the reason for doing so. For a few minutes I have the pleasure of steering you away from the ugly vitriol which pervades our political pigpen – and that, alliteration – is yet another thing which is weally winding me up wight now. Our current leader, have you noticed?, has a particular propensity for practising prolonged pompous pronouncements, peppered with diatribes on dithering , delaying, deceit and denial.

So it’s a touch ironic that I’m turning to the Russian composer, Modest Mussorgky (1839-1881) today. It’s a strange name, Modest. First you commit perhaps the most selfish thing possible by gifting the world a reflection of yourself; and then you foist upon your creation a name, meaning moderate or restrained, as if by way of an apology.

Sadly his musical output did little to disabuse this. Nowadays he is chiefly known for works like Night on a Bald Mountain and his opera about another Boris chieftain, Boris Godunov. He was a highly gifted pianist, but he struggled with the subtleties of orchestration, causing many, including Tchaikovsky, to be uncharitable in their assessments of him. Even his teacher, Mily Balakirev, concurred that “Yes, Mussorsgky is little short of an idiot.” Despite the success of Boris, he did not get a good press.

Time for some belated balance. In 1874 Mussorgsky composed a fiendishly difficult piano piece in ten movements to celebrate the pictures of his friend, Viktor Hartmann, known as Pictures at an Exhibition. Its main theme, The Promenade, which filters in and out of the piece to reflect the different mood of the viewer as he wanders through the exhibition, was used in the 1980s political sitcom, The New Statesman, (when did we last see one of those?) featuring an MP called Alan B’stard, many of whose irreverant views have turned out to be spookily prescient. It was a part specifically created for, and acted by, the late Rick Mayall, and is comedy at its very best. Dig it out on The Youtube.

Classical music often seeps into our minds in ways like this. We know or like the tune, and can be content to leave it at that; but a little more digging adds to its appreciation. Today’s passage is the last of the ten, a picture for the design of the Gates at Kiev. Don’t go looking for them, the project got cancelled. (Another taste of things to come?) This final part comes from the orchestrated version by Maurice Ravel in 1922.

Brace yourself: this is a stonking sound, so don’t hold back on the volume. It’s precision playing. As you listen to it patiently,  you will hear how it expands and unfolds, bringing back the original theme, and culminating in a thundering, majestic finish.

I suspect Mussorgsky’s life was not a particularly happy one, and a high dependance on alcohol from an early age did for him at just 42. His grave has long since been covered by tarmac, but he gets his fair share of visitors: it’s now a bus stop in St.Petersburg. This famous portrait by Repin was done just days before died. 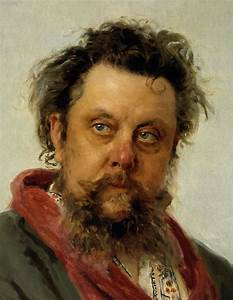 Click on the link and forget our political shambles – albeit with the help of some music applied to a political satire.