With impeccable timing I have just completed, through a combination of luck and discipline, the Christmas edition of The Spectator. In turning the final cover and consigning it to the waggerpaggerbagger beneath my desk, I say farewell to the season. (It was, incidentally, a Christmas-crackeringly good read.) 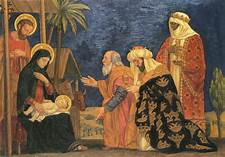 Tomorrow, the 6th of January, marks that occasion formally. The visit of the Three Wise Men to the infant Jesus, The Epiphany, gives me the perfect excuse to share my favourite Christmas melody with you, which I last did at the end of 2016; so it doesn’t seem overly early to re-issue it with a different singer, and one of my favourites, Gerald Finley.

Back in 2016, I put together the content for the programme for the concert in St.Paul’s Cathedral in aid of MS. It is there in full on YouTube, (Finlay about 10 minutes from the end) and the performaces of singers and actors still bring a lump to my throat. One of the thrills of being at the heart of the rehearsals on that day was having an element of control, enabling me to ask Gerry to sing it once more – not, of course, because there was anything wrong with the first rendition, on the contrary: it was so utterly delicious, that I just needed to hear it again.

What I had forgotten, and this applied to all participants on the night, is that professionals don’t give it their all in rehearsal. Something is always held back for the performance itself, the result being that however prepared you think you might be for what is about to follow, an unexpected variation, be it emotion or emphasis, will be thrown in – and suddenly the eyes fill up. And so it was that night. I remember shedding a tear during rehearsal of one the spoken pieces, then declining the offer of tissues just before the concert after I’d left my handkerchief in my wife’s coat, insisting, “I’ll be fine.”

Many have told me this was the lovelist version of The Three Kings by the German composer Peter Cornelius (1824-1874) they had ever heard. Poor old Cornelius: he did, in fact compose a number of works, including three operas, and was friendly with, and influential on, Wagner and Liszt, but he is now chiefly known for this.

But if you’re going to be known for one piece alone, you could do worse. Christina Rossetti published her poem In the Bleak Midwinter in 1874. We are all familiar with the sentiment in the final verse of offering the heart in the absence of sufficient means to bring anything else: if you listen to the third, final, verse here I think Cornelius might just have got there first.

And so farewell, Christmas. My thoughts and heart to you wherever you are for 2020.

Click on the image for another version by Gerald Finlay –

13 thoughts on “Farewell to Christmas with Cornelius.”