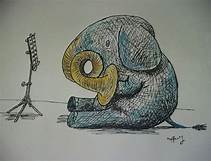 The scene I am taking you to now is a modest flat with no electricity or running water. We are in Munich in 1883.

It is the dwelling of the Strauss family. The highly gifted Richard, about whom I have written once or twice before (search bar for details),  is now 19. Richard is the son of Franz, the principal horn player in the Munich Court Opera, and Josephine, the daughter of a successful and wealthy brewer.

Quite where the notion came from that it is not done to marry trade, is beyond me. Marrying the daughter of a brewer is surely one step to securing a life of wedded bliss. And I married trade myself. (Leather has its own perks, naturally, but I’m not sure I can link them to this post.  )

Back to that flat. Imagine a conversation between horn player father and precocious son which, in an updated version, might have gone something like this  .

– Hey, Dad, I’ve written this concerto for horn and orchestra. It’d be great if you would be the first to play it. What d’you think?

– Oh wonderful, good lad, let’s have a look, shall we?

Pause. Quite a long one.

– It looks fantastic, son, but the thing is, not sure how to put this…I mean, seriously? 

– I do, oh yes, I absolutely do. It’s just that it’s so difficult. There’s no way a man of my age can play that without doing himself a serious injury.      Sorry, son, but that top Bb is way out of my range these days.  ’Fraid you’re gonna have to find someone else for this.

The horn is perhaps the hardest instrument in the orchestra to play. In order to get some orchestral experience, I was taught it to a pathetic level (not my teacher’s fault) in my teenage years. My position in the brass section can only be described as fleeting. 

So I have a little understanding of Strauss senior’s qualms. That gives me only a slight advantage, because I am sure it will become apparent to anyone listening to this last movement of his first (of two) concerti for horn.

The concerto is less than 20 minutes long and is more or less seamless through its three movements. These last six minutes are technically fiendish but filled with relentless exuberance. It requires the highest level of breathing control, a demand displayed effortlessly  by the late Barry Tuckwell in this concert some thirty years ago    , (so the picture is not the best). Tuckwell died last month and was one of the few of whom it can be fairly said was a master of his craft.

This is a live performance, don’t forget. In the course of a hundred years, many improvements have been made to the instrument – there were no valves on Franz’s horn, for one thing.   Even accounting for that, there are no luxuries of a second take in the studio, and yet I can detect only one duff note.  You will find versions which may appear a little smoother in sound, but Tuckwell was not one for caution: this is a gutsy, brassy, no-holds-barred  performance, with a great tune, too.

And as such, an approach which, I suspect, the youthful Strauss would have  happily endorsed.

I never reached three figures with a bat in my hand. I notice, however, that this marks my 100th post! Ton up. Thank you for all the kind comments you send, they are much appreciated – please do pass it on to others.

18 thoughts on “Strauss and the horn”