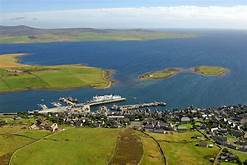 I have no credible excuses for recent radio silence. It’s amazing how idle you can become when you’ve got so much time on your hands. Doing not very much, it turns out, passes the time extraordinarily quickly.

Yes, I’ve read a lot more, including committing to memory a number of famous poems, (good medicine for the little grey cells) and listened to more music. But I haven’t learnt Mandarin, nor written a book. Just haven’t had the time, you see.

It is high time, however, that I shared some music with you, and my choice today is the very simplest of tunes, but one, if you if you sink into it, you will also find to be  profound, comforting, as well as being peculiarly apt in the current environment.

If you aren’t familiar with the music of the British composer, Sir Peter Maxwell Davies (1934-2016), this site is unlikely to alter that state of affairs after today: that’s because Farewell to Stromness, an interlude from The Yellow Cake Revue, is quite unlike any of his other music, much of it angry and dissonant, and almost all of it multi-styled.

‘Max’, as he was known to his friends, was a prolific composer and acclaimed conductor. He was a republican, but changed his views on the monarchy after being made Master of the Queen’s Music for ten years. He was also an environmentalist, and it is in this context that this piece needs to be taken.

Stromness is the second largest town in Orkney, where Maxwell-Davies had a home. The Yellow Cake Revue is a collection of cabaret-style pieces in protest to plans for a uranium ore mine: Stromness was just a couple of miles away, and would have been the most affected by pollution if the plans had gone ahead.

The piece was written originally for piano, but its transcription to guitar was an inspiration. There are several recordings, but I have deliberately selected the score so that you can just listen without visual distractions. We are told that the underlying pace is supposed to be representative of the villagers walking away from their contaminated homes.

And so ultimately it is a brief piece about loss and protest: a metaphor, you might think, for the global climate forty years after its first performance in 1980. But it is extraordinary how all that can be conveyed with such simplicity.

22 thoughts on “Loss and protest with Maxwell-Davies”